This document describes how to set up OpenVPN between a host computer running Linux and remote Windows clients. The Linux host acts as a secure gateway to the intranet, which consists of a number of Windows computers and Linux machines running Samba. Both ends of the link receive virtual IP addresses. OpenVPN is much easier to set up than OpenSWAN. The downside is that OpenVPN does not prevent unencrypted traffic from flowing along the connection. To block this, OpenVPN must be used with a firewall to throw away the unwanted packets.

As with OpenSwan, it's essential to watch the traffic with tcpdump at every step. If set up incorrectly, a VPN may allow your computers to communicate without actually encrypting a single byte. Remember, being able to ping from both sides does not necessarily mean your VPN is working!

What is a VPN

Here's the blurb I give to our end users:

A VPN (virtual private network) is client/server software that allows you to connect securely to a remote network from anywhere, including over a modem or a broadband connection. Our VPN will allow you to browse computers on the network as if you were at work. You can drag files from your computer at work to your home PC, send email through our server, and everything else you can do at work. This lets you do work at home at night, on weekends, and on holidays as if you were in the office 24 hours a day, working continuously!

Our VPN gateway is named "endive". Once you are connected to endive, you will have complete access to our internal network. However, all your communications will be encrypted so that hackers on your remote network can't read any of your information. Access to our network is controlled by a certificate, which is a special encryption code that is different for each user. No one else can access our VPN unless they have a valid certificate. If you lose your computer, or someone steals your certificate, please let me know and I will give you a new one.

Click on openvpn-2.0.2-install.exe and click "Next" to begin the installation. After installing, reboot the computer. OpenVPN will install itself in C:\Program Files\OpenVPN and create a directory there called "config". The Windows version of OpenVPN will only run on W2K or later. Normally, you must have administrator privileges to install or run OpenVPN (but there are ways around this).

Generate keys for the server and for each client manually using SSL. Version 2 of OpenVPN includes some scripts that make this easier. If you use SuSE Linux Enterprise server, it is also possible to use PKCS #12 formatted key files created by YaST2 (see "pkcs12" directive in OpenVPN man page).

Script for adding a new user

For other options, see the OpenVPN2.0-HOWTO.

For Windows XP, you may have to manually disable the firewall for the tap adapter.

Start server and test the connection

With this setup, we could also connect to 10.1.0.1 (the VPN server) over a commercial 64k dialup from our ISP. However, tcpdump showed that Windows browsing packets were going around the VPN (i.e., not through port 1194) and were being dropped by the server. To fix this, all that was necessary was to make some minor configuration changes and activate NAT on the VPN server. Now we could get to the Samba servers in the intranet behind VPN server and browse their shares by typing something like "\\diphtheria" in Explorer on the Windows PC named Cholera.

Running tracert on the Windows client tells you what's happening. In our real-world case, we have: Packets sent to your intranet are taking the wrong path. The fix involves a lot of pushing and shoving. You also need to activate a NAT proxy service on the VPN gateway.

For the skeptical, here is a screen dump of our intranet Samba server as seen from a Windows 2000 computer using OpenVPN. The Windows computer is connected over a dialup and has a dynamically-assigned IP address. 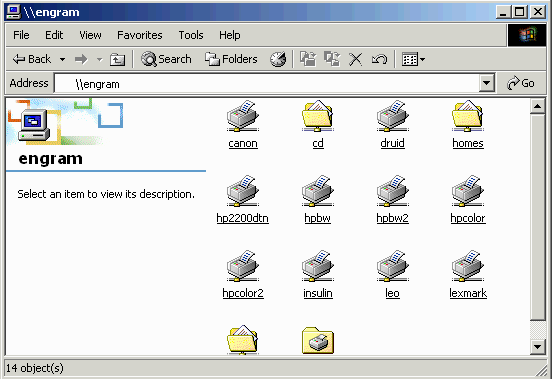 My work here is done.