This article describes how to install SuSE Linux version 9.0 onto a Toshiba Portégé from a CD using a CardBus CD-ROM. More details about installing from an NFS server, and additional information about the Toshiba 3015CT laptop, can be found at http://randombio.com/linuxsetup23.html.

These older Porteges are preferable to the later ones, because they have a trackpoint ("eraser head") pointer instead of a touchpad, and two PCMCIA slots instead of a single slot like later models. They are also thinner. The computer is extremely light and convenient and fairly rugged for an ultralight, though it was highly susceptible to even a few drops of water. At one point, in an attempt to kill a fly by spraying Windex at it, I accidentally sprayed a couple drops of Windex onto the keyboard. This shorted something out inside the keyboard, and caused the keys to generate keystrokes continuously. I had to hit the reset button to shut off the Toshiba and wait until the keyboard dried out. Unfortunately, the disk became corrupted at this point, forcing a reinstall of Linux. I began to suspect that Windex may actually be produced by Microsoft. After some false starts, I finally got SuSE 9.0 installed from an ATAPI CD-ROM. 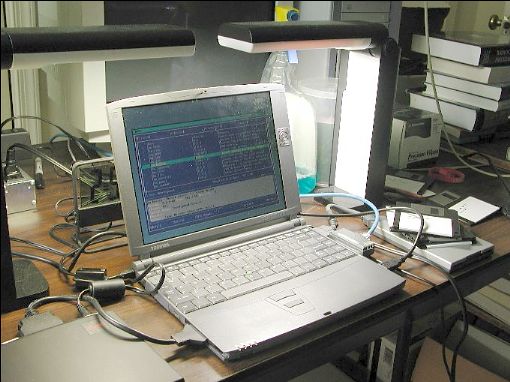 The Toshiba 3015CT showing the Yast text-mode installation screen. The evil glass cleaner is visible lurking in the background. Notice, however, that there are no flies anywhere in sight.

Installing SuSE 9.0 on this vintage ultraportable is only possible if you have a lot of patience. Because of the small amount of physical RAM, Yast automatically goes into text mode. Unfortunately, even the text-mode version of Yast has a large memory footprint, which causes a lot of page swapping if you only have the default 32MB of RAM. I strongly recommend getting the extra 32MB memory module, if you can find one, before attempting installation.

This is the hardware configuration of my 3015CT:

It's necessary to change the BIOS configuration, otherwise installation will hang after trying to load the "yenta_socket" driver for the PCMCIA bus. This is a disaster, because PCMCIA is needed for both network and CD-ROM installation. Because I had problems with yenta_socket hanging, I borrowed a USB CD-ROM to attempt installation from a USB CD-ROM. Unfortunately, the installation software wouldn't recognize the USB CD-ROM regardless of how I tweaked the BIOS settings. If you can't get past the yenta_socket driver (which replaces the old reliable i82365 driver for the i82365 chipset), it would be very difficult if not impossible to install SuSE on this machine.

Because of its bloated memory footprint, the text-based version of Yast that is included with SuSE 9.0 runs extremely slowly on the Toshiba compared to previous versions of Yast. If you can use the default package choices, I recommend accepting them. On the Toshiba 3015CT, every time a package was selected or deselected, the display paused for precisely 1 minute and 47 seconds, with the hard disk light flashing continuously. Since there are hundreds of packages, selecting them individually at this rate could take days. Just selecting all the Perl modules would take at least two hours.

In fact, Yast's page-swapping on the Toshiba makes it so slow that merely scrolling down a list took several seconds per line. At one point, I tried to scroll up. The computer froze for two minutes, and then over the course of the next few minutes, it finally scrolled up, then down, then up again. The speed is the same regardless of whether you install from a CD-ROM or NFS. In contrast, in a desktop, these operations are instantaneous. I finally gave up on selecting packages individually and selected the "Kernel developer" and "Network server" categories. Despite the fact that I skipped installation of many small packages, I still had to fight with Yast to get it to deselect unwanted packages in order to cram the installation into the 1.75 GB /usr partition. This took over six hours. (Of course, I was doing other things at the same time, like surfing the Web, eating lunch and dinner, dealing with a hacker attack on the lab's email server, and putting up some drywall). Installation from the CDs took another three hours. This is an order of magnitude slower than installation of SuSE 7.0.

This has always been a problem with SuSE--you have either too much or too little granularity in package selection. For example, it would be nice to be able to install all the Perl-related files or all the programming packages with one selection. What SuSE really needs is some way to select packages to install on some other computer, then transfer that list to the new computer during installation. This would be very useful in reducing the down-time required when upgrading a critical server.

As always, there are problems. Nonetheless, it's remarkable that Yast didn't crash despite the small amount of available memory.

There were many more problems with SuSE 9.0 than SuSE 7.0, many of which would probably be difficult for an inexperienced user to fix.

The Toshiba 3015CT ran at a reasonable speed considering its small memory capacity, as long as large apps like Mozilla were avoided. With the modular kernel intalled by SuSE, it was impossible to reboot the system or close the lid without causing the OS to hang. The only way to fix this was by hitting the reset buttion, which caused "failed fsck" errors on any ext2 filesystems. Compiling a kernel without module support was the only solution. However, so far I haven't found the right combination of configuration options to get both the Linksys PCM200 network card and SB Audigy card to work.