This is the setup of our incubator alarm system. The incubator has a serial port on the back that sends out readings of the temperature, carbon dioxide concentration, and humidity at regular intervals. The RS-232 signal goes through our network wiring to a patch panel. A Linux server with a multiport serial card monitors all the incubators simultaneously. The messages from the incubator look like this:

These messages are logged on the server's Web page. When the CO2 drops below a certain level, it is an alarm condition and the message looks like this: The Linux computer then sends out email messages and dials a modem to notify someone of the problem. Since most cell phones have caller-ID, the modem just hangs up when the scientist answers. The scientist then fixes the incubator, completing the circuit. The software remembers the previous alarm state so that only one email and one phone call are sent out to each user for each event.

Note that only the network wiring, not the network hardware, is used for the signals from the incubator. The RS232 signals never touch the computer network signals. It's a good idea to use a dedicated color for all cables carrying serial signals. We could also have used the telephone wiring system, since in our building the same type of wire is used for the telephones and network connections. But then we would have gotten in trouble with the Phone Cops. 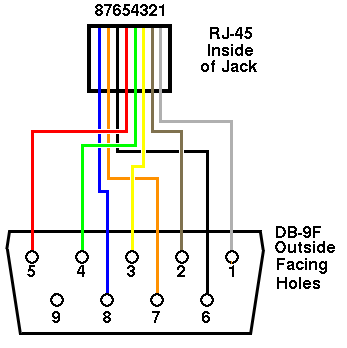 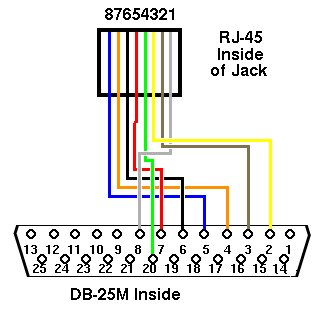 We use a DE9F to RJ45 adapter, part no. 01910 from www.pccables.com to get the serial signal from the incubator to the network wall jack. The first figure above shows the wiring viewed from the back (inside) of the RJ-45 jack on the adapter and the front (outside) of the DE9F. The wiring is not critical, but it's obviously important to be consistent because once the adapter is assembled, the wires are no longer visible. Note that the color of the wires in this adapter is unconventional. If your incubator used a DB25 serial connector instead, it would be wired as shown on the second figure. An identical adaptor is used in the wire closet to convert the RJ45 back to a DE9, which is then plugged into a serial port on the server.

For the telephone, a different type of adapter can be made by splicing the appropriate lines of a Cat-5 patch cable to a telephone cable. Note that in a phone cable, the two ends are inverted, while network patch cables are wired 'straight through'. When making the adapter, pay attention to the positions on the plug, not the colors of the wires. This figure shows the positions as viewed from above the clear side or "top" of the plug:

In fact, this second adapter is not necessary. Just run a phone cable from the computer's modem to the phone jack. Unfortunately, after we set up our modem, we discovered that we didn't actually have any phone jacks in the wire closet. But there were lots of phone wires. So we purchased a little box that has a RJ12 surface-mount jack with a 110 punchdown block inside and connected it to the fax line. The box is wired up as shown below, viewing the RJ45 from the front (outside). 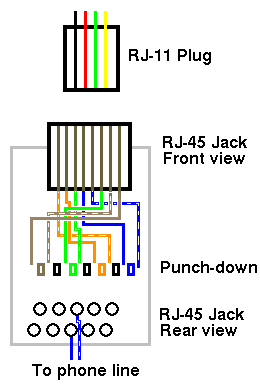 Only two wires are needed to connect to a phone line. These correspond to the center two lines (green and red) in the RJ-11 plug and the blue and blue/white wires (the center pair) in the patch cable. The two lines go to the appropriate location on the 110 punch down block used by the phone system. The voltage across the phone line should be 47 volts DC. It goes without saying that you must be very careful not to accidentally connect the phone line to your router or any other network equipment.

Category 5 cables are wired in either EIA-568A or EIA-568B patterns. The figure above shows 568A and B color coding as viewed from the clear side (the "top") of the RJ-45 plug. These configurations give better performance than other arrangements. Obviously, both ends of the cable must be wired identically. Even though 568A and 568B patch cables can be used interchangeably, it's best to standardize on one or the other. Ideally, this fact should be documented somewhere.

Just for the record, we use EIA-568B at this location.

Important: The computer and freezer should be protected from electrostatic discharge by placing an RS-232 optical isolator or a diode-based surge protector such as a Tripp-Lite DRS232 between them. Otherwise, a surge could destroy the serial port on the computer or the freezer.

How to make a category 5 patch cable

When making a Category 5 network cable, it's important to minimize the untwisting of the twisted pairs. This is not important for serial cables, but for network cables, untwisting causes loss of bandwidth, making your network connections slower.

Note the following points about the program: