Dec. 25 (Entropy News Network) - For years, radar operators at airports have complained about the difficulty of detecting Santa Claus on radar. But according to radar experts, the inability of our most advanced radar tracking systems to detect the red-suited Christmas icon is no accident.

Although computer models predict that Santa's sleigh should have a relatively large radar cross section, in fact it possesses a virtually undetectable radar signature. “There is evidence of highly sophisticated stealth technology incorporated into the structural components of the sleigh,” said one expert who wished to remain anonymous. “For example, the sleigh is coated with microferrites that absorb radar signals. The curvature of the sleigh's structural and joint-spanning members, which are made of an advanced titanium-vanadium alloy and carbon fiber composites, is designed to avoid reflecting radar energy in the commonly used X- and Ka-band regions, that is, in the portion of the electromagnetic spectrum between 8 and 12 and 27–40 gigahertz, respectively.”

In recent months, other details have emerged in documents recently declassified by the Department of Defense that describe the retrofitting of Santa's sleigh with advanced anti-radar technology. The centerpiece of Santa's Sleighborne Tactical Defense System (SSTDS) is a high-tech state-of-the-art system known as a Suppression of Enemy Air Defense, or SEAD, system. “Santa Claus undoubtedly utilizes a special type of radar called a `low probability of intercept' radar, which is similar in many respects to the synthetic aperture radar used by NASA,” said the expert, who still refused to give his name. “Its purpose is to reduce the probability that Santa's sleigh will be tracked and possibly inadvertently attacked by our antimissile target acquisition systems.”

“The SSTDS maximizes Santa's situational awareness and defensive posture, and enhances his survivability throughout the battlespace threat envelope,” added a Defense Department spokesman who has studied Santa Helper technology. “It is a fully integrated component of Santa's NCBFSK jam-resistant encrypted communication system, which is an integral component of his CRM-114 discriminator subsystem.”
(Continued below) 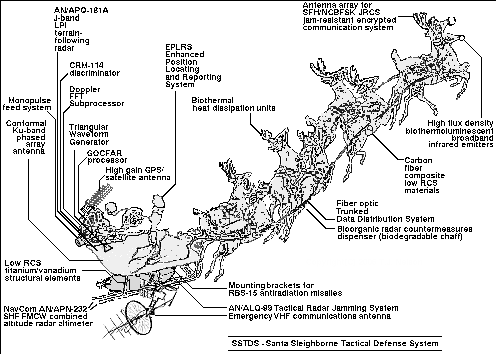 Although SEAD has traditionally been associated with the use of antiradiation, or radar-seeking, missiles, officials are quick to emphasize that there is no evidence that Santa Claus has ever deployed weapons of this type. “Santa relies almost exclusively on passive electronic countermeasures and signals intelligence, known as SIGINT, principally to acquire data concerning the behavioral characteristics of children,” said one Defense Department spokesman. “There's absolutely no evidence that Santa is jamming our radar signals.”

Santa has not only evaded our most sophisticated radar tracking systems, but is able to avoid colliding with the many high-speed aircraft flying over America, according to expert air traffic controllers. According to the radar expert, who is not interested in taking credit for his many insightful statements on the subject, Santa probably uses an AN/APQ-181 J-band terrain-following radar similar to the radar used on America's most advanced B-2 stealth bombers. According to a brochure that this intrepid reporter picked up off the floor of this anonymous radar expert, Santa's terrain avoidance radar possesses a monopulse feed system that enables fractional beamwidth angular precision. It is designed to have a low RCS with respect to both in- and out-of-band RF illumination. This ensures the ultimate in survivability even in the most hostile threat-intensive environment.

As one defense spokesman put it, chewing on a cigar while he spoke, “That son of a bitch is just damn hard to pick up on radar!”

Rudolph's red nose is also no coincidence, say experts. “Clearly Santa is using infrared night-vision technology,” said the expert, who after repeated questioning by this courageous reporter finally admitted that his name is, in fact, Guglielmo Marconi. “The red nose is probably a highly efficient incandescent broadband infrared source. He's out in front for a very good reason: to provide wide-spectrum continuous wave illumination throughout the portion of the infrared spectrum between 200 and 4000 cm−1.”

Researchers are mystified by the technology behind Rudolph's nose. Some experts suggest that Santa may have used cloning to introduce genetic modifications into the reindeer's DNA, and may be using some unknown form of biothermoluminescence to achieve such high levels of nasal irradiance. But how he did it is unknown. “Santa seems to be way ahead of us in some respects,” lamented one molecular biologist. “We would love to get our hands on some of that nasal mucus from those reindeer.”