Fluorescent lamps have many advantages over incandescents: they are available in a variety of color temperatures, they have a large surface area that creates a better architectural effect, they last longer, and they use less electricity. However, it is also a royal pain to get them to work with a dimmer. 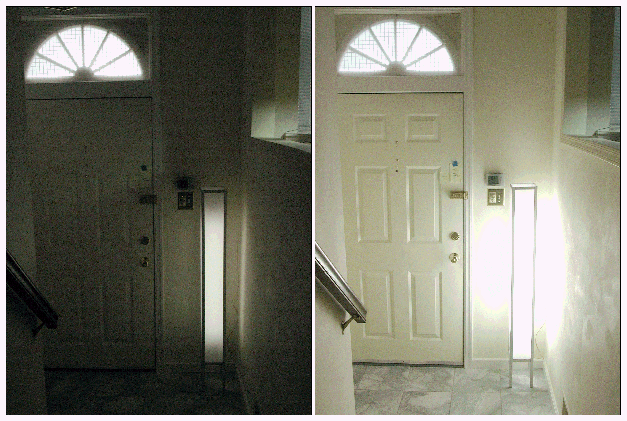 Photo of dimmable fluorescent fixture at its lowest (left) and highest (right) setting. Both photos were taken using an identical 1/60 second exposure and F/2.5. The fixture contains a single F25T8 bulb with a color temperature of 5000K. The ballast is a Lutron FDB-3627-120-1 and the dimmer (which I mounted on the back of the fixture) is a Lutron NTF-103P NovaT dimmer. There is no visible flickering even at the lowest setting. The fixture was made by brazing aluminum angles to create a rectangular frame, which was then fitted with rectangular pieces of 1/4" thick Lucite. This lamp burned continuously at its dimmest setting from May 2007 to January 2019 with no problems (about 103,000 hours), at which point one filament on the bulb burned out and the dimmer was broken. Inside the dimmer a power transistor and several diodes were found to be covered with gray dust (suggesting that gray smoke had escaped) and I decided it was not worth repairing.

Although some people have reported success using various custom-built contraptions, simply reducing the voltage to a fluorescent tube doesn't work. Without adequate heating of the filament, the lamp ends will turn black and will fail prematurely. The best way to dim a fluorescent is to use a dimming ballast. The dominant manufacturer of dimming ballasts at present is Lutron, which makes several types: the best ones are the Hi-Lume series, which dim from 1 to 100%, and the Eco-10 series, which dim from 10 to 100% of maximum brightness. Because the response of the human eye, with its iris partially blocking the two-dimensional plane of light, can be roughly approximated by a square root function, a lamp dimmed to 1% of its normal brightness appears to be actually 10% as bright as the undimmed lamp, while a lamp dimmed to 10% of its maximum brightness appears to be 32% as bright as the undimmed lamp.

Another difference among ballasts is the total harmonic distortion (THD), which governs the amount of radio frequency interference (RFI). Lutron's Hi-Lume ballasts, for example, have a THD of 10%, which is comparable to a good non-dimming ballast. I measured only small amounts of RFI between 150 and 400 kHz from the lamp fixture shown above, which has a 10% THD ballast; interference at these frequencies was undetectable further than 10 feet away. That is comparable to most other fluorescent lamps with electronic ballasts. Good grounding and encasing everything in metal are the keys to avoiding RFI. Avoid ballasts that rely on the fixture for shielding.

Now for the drawbacks. Dimmable ballasts are very expensive: at the time of this writing, you'll fork out over US $100 for one of these babies. As with all electronic ballasts, dimming ballasts only work for a specific type and number of fluorescent bulbs. For example, putting an F21T5HO (high output) bulb in a fixture containing a ballast for a regular F21T5 bulb could cause the ballast to fail. Also, dimming ballasts are only available for certain types of fluorescent bulbs. If you need a "full-spectrum" lamp or a lamp with a specific color temperature, it's necessary to download one of the manufacturer's charts and check whether a ballast is available for the type of bulb you want to use.

Dimming ballasts are also a lot bigger than conventional electronic ballasts--up to 18 inches in length. They generate more heat than regular ballasts, and must be flush-mounted on a grounded heat-conducting metal fixture, with adequate ventilation.

Another problem is that for most dimming ballasts, you cannot use an ordinary light dimmer switch. A special three-wire dimmer is required. Guess what--these are expensive, too (about US$ 100). Although the manufacturers often say that any dimmer will work, if you dig into their literature you'll find that a specific model of dimmer is required for each dimming ballast. If you want to use a standard two-wire dimmer, you will need a special type of dimming ballast such as Lutron's Tu-Wire ballast that is recommended for ordinary dimmer switches. (In my experience, Tu-Wire ballasts tend to be fairly noisy. They also produce a lot more radio interference ). See also fluorescent-lamp-interference.html .

The biggest disadvantage is that, unlike a standard fluorescent fixture, there is no starter to replace. When the dimmer stops working, you must replace the entire dimming ballast.

Also, most dimming ballasts require standard four-pin bulbs and four-pin rapid-start sockets. They won't work with two-pin bulbs or instant-start sockets, because these have the two pins shorted out on each side, which will damage a dimming ballast. Make sure your fixture is wired according to the manual that comes with your ballast before firing it up. For example, you can't have two sockets wired in series.

Because it violates the electrical code to put a dimmer on a receptacle, the lamp must be built into the wall or ceiling, or the dimmer must be attached to the lamp fixture. Of course, this is also true for conventional dimmers.

There are a few other problems unique to dimming fluorescents:

Unless you need the particular lighting characteristics of fluorescent bulbs, the technology is still sufficiently primitive that incandescents are still much preferred for dimming applications. Unfortunately, in some parts of the country, there is a movement to ban incandescent lamps. Many people suspect that the real reason for this is not to save energy as is claimed, but to give governments more control and to create a new source of revenue. Once incandescents have been eliminated, local governments will be able to impose large fines for disposing fluorescent bulbs in the regular trash, because of their mercury content. The possibility of imposing fines will become an irresistible incentive for local governments. We may very well someday see random inspections of trash!